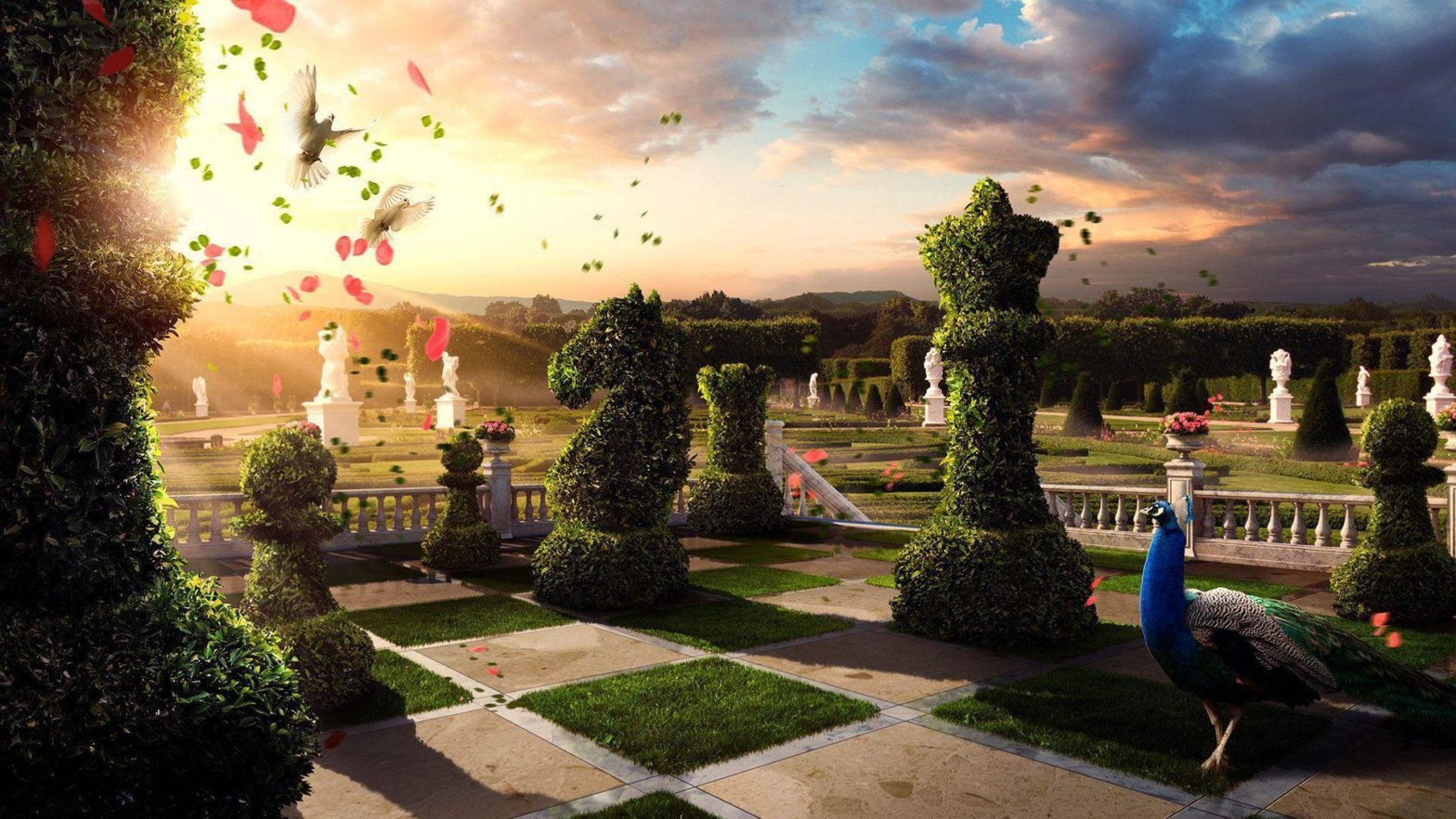 We can’t be trapped in reality because reality contains no limits; we can however be trapped in our idea of reality, our map of reality. This sounds rather ‘new-age’ or idealistic perhaps, but it is also perfectly true. When we say this that doesn’t mean that there are no biological limits in reality because of course they are – I can’t go and live at the bottom of the sea and I can’t wade through a lake of fire wearing nothing but shorts and a T-shirt, but this isn’t what we’re talking about. We’re talking about the ‘fine structure’ of reality, so to speak, not the grosser structures that exist within it. There are no limits built into the fine structure of ‘reality’ (or ‘space’) – limits are only to be found in the grosser structures, not in the actual ‘essence’ of things.

Even to try to explain it like this is going wrong however because ‘structure’ is always built on limitations. That’s what structure is – it’s a system of limits, a system of rules. So instead of saying that ‘the fine structure of reality’ has no limits built into it we should just say that intrinsic space has no limits on it; if it did then it would hardly be worthy of being called ‘space’, after all! If space came with certain inbuilt limitations than obviously there wouldn’t be any ‘space’ in it – there would only be compartments, and compartments can only accommodate what they were designed to accommodate.

This gives us a good way of looking at the difference between extrinsic and intrinsic space – intrinsic space is space that hasn’t been designed, hasn’t been created, and which holds no purpose. Extrinsic space, on the other hand, is space that has been designed, has been created, and which does have some sort of ‘inbuilt’ purpose. Extrinsic space is another way of talking about games, in other words. In the general run of things it pretty much goes without saying that we don’t distinguish between ‘intrinsic’ and ‘extrinsic’ space – this isn’t really a type of differentiation that occurs to us. But we if we could see the difference then this would save us from an awful lot of confusion. Because we don’t appreciate that there is this ‘finer’ or ‘subtler’ to reality – which exists beneath the surface of structure, so to speak – we naturally imagine ourselves to have our existence solely on the structural level. We implicitly see ourselves to be structures, in other words. We implicitly see ourselves to be ‘things existing in a world of things’, as Colin Wilson put puts it.

When we understand ourselves to have our essential existence on the level of extrinsic space, without understanding what extrinsic space is or that it is there at all, then this is a very different kettle of fish from simply and problematically ‘being’, in an unconditional way, which is the actual un-manipulated situation. This is a whole different ballgame, therefore. What we are doing when we are immersed in extrinsic space is to be pretending to be something without knowing that this is what we’re doing. We are ‘playing a game’ but there’s nothing playful about this game – on the contrary, it is deadly serious. Existence on the level of extrinsic space has an immensely immersive quality to it – it gets to be as immersive as it is because we have now have zero capacity to understand that they could be such a thing as ‘intrinsic space’ (which is also the same thing as freedom). Understanding ourselves purely on a structural level precludes any awareness of intrinsic space, just as it precludes any awareness of what freedom actually means…

‘Extrinsic freedom’ might sound like a fancy sort of thing but it isn’t – it’s a very readily understandable concept indeed – it simply means ‘the freedom to obtain our goals’. If we were totally unable to obtain any of our goals, for an indefinite period of time, then – to the conventional way of thinking about things – this is to be regarded as a very dire situation indeed. There is none worse, in fact. We are therefore exhorted ‘not to give up hope’, and ‘keep on trying,’ and so on and so forth. The whole dreadful rigmarole of ‘positive thinking’ comes into play here – positive thinking is all about hanging onto the illusion of our extrinsic freedom for as long as we possibly can. This is just another way of saying that positive thinking is all about staying identified with the conditioned identity (which is our idea of ourselves) for as long as possible. Extrinsic freedom can equally well be seen as ‘the freedom to make meaningful choices’ and our mental health is generally seen as being synonymous with the freedom that we have to make choices. CBT for example, in its traditional form, is all about our so-called ‘freedom’ to make helpful or advantageous choices – we are given to understand that, with regard to our mental state – no matter what the situation we might find ourselves in – we can always make helpful choices. The unspoken implication here is of course that if were to happen that we weren’t able to make any choices then this would be the most undesirable situation imaginable. This would be – the implication is – a very grim scenario indeed. If you were to talk to anyone in the world of mental health care they will almost certainly equate ‘mental well-being’ with ‘the capacity to make choices’; how – we might ask – because anyone possibly argue against this when it sounds so very obviously true?

And yet what is ‘obvious’ is not generally true – these two terms don’t actually belong together! The truth, by its very nature, is not going to be obvious – the truth is always unstated, not stated! When we make choices then we are using the thinking mind; we are using the thinking mind because that’s where our ‘choices’ come from. To think is to choose and to choose is to think. ‘The freedom to make choices’ is therefore the same thing as ‘the freedom to think’ but the thinking isn’t actually freedom! When we think we allow our awareness to run down well-worn tracks; when we think we allow our consciousness to be robotized. If I am to have the ‘freedom’ to make rational choices about my situation then what this means is that I must NOT have the freedom to see that my so-called choices don’t involve any free will. How could they when they are completely determined by the mechanical system which is thought? This is what James Carse calls ‘self-veiling‘ – if I am to play a game then I must not know that this is what I am doing; I have to veil from myself the freedom that I have not to play or the game won’t work. ‘The freedom to choose’ is therefore another way of talking about negative freedom; it is ‘the freedom not to be free’, or ‘the freedom to be unfree and yet not know it’.

Once we ‘see beyond the obvious’ then it is clear that by equating mental health with ‘the freedom to make meaningful choices’ (choices that are meaningful to us, anyway) we are inverting the natural order of things, so to speak. We are inverting the natural order of things because – in ‘the natural order of things’ – our greatest good must be synonymous with our freedom, whereas the inverted scheme of things asserts that our ‘greatest good’ is synonymous with ‘the integrity of the game that we are playing without knowing that we’re playing it’. We must protect the integrity of the game no matter what because this is the means by which we get to be unfree without knowing that we are. What could be clearer example of inversion than this? What kind of a crazy thing is this to assert – that our happiness and well-being is somehow to be found within the narrow confines of our meaningless games? How do we get away with saying that ‘mental health’ is when we identify so much with the thinking mind that we actually lose touch with reality? To use the thinking mind is one thing, but to identify with it is to identify with a fiction since the thinking mind deals only in abstract conventions. To identify completely with the TM is to lose oneself in a game that we cannot see to be such.

Mental health – when we look at it in a ‘non-inverted’ way – can be seen as the freedom not to have to buy in to any of the thinking mind’s so-called ‘choices’. This is a negative definition, not a positive one. Our ‘greatest good’ lies not in any of thought’s constructs, not in the fulfilment of any of its plans, but in the removal of that ‘double restriction’ – [1] the restriction (or imprisonment) within the world that thought has created for us, and [2] The restriction which prevents us from being able to see that this so-called ‘world’ isn’t actually the world at all but an artificial construct. This brings us back to our ‘starting-off’ statement with regard to the impossibility of being trapped in reality:  we can’t be trapped in reality because reality is made up entirely of freedom! It’s overflowing with freedom. We CAN be trapped in the thought-created world, the game however, because the thought-created world is made up of nothing but limits, nothing but rules. The TCW disguises its own stark lack of intrinsic freedom by providing us with a whole heap of extrinsic freedom – as much of it as we want! Extrinsic freedom hoodwinks us into believing that we already are free when we’re not. It does this in a very cunning fashion – it camouflages the lack of intrinsic freedom by saying (or implying) that we will be free if we obey the rules correctly. This is what extrinsic freedom IS – it’s the freedom that supposedly exists ‘outside of ourselves’, it’s the freedom that is obtainable ‘via obeying rules’ – the only drawback here being that this freedom doesn’t actually exist. It’s slavery in disguise.