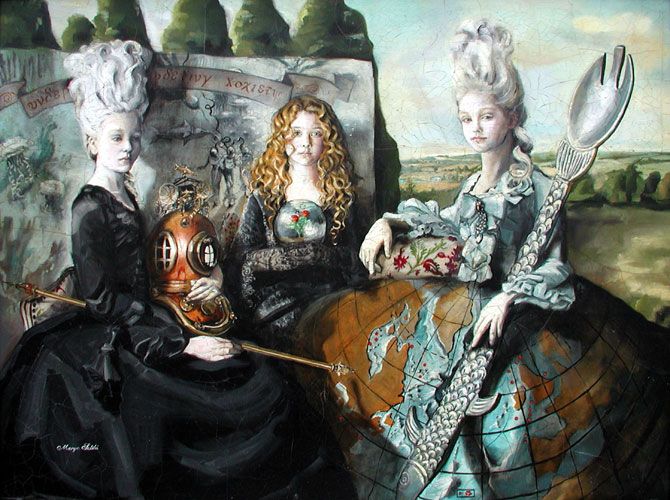 The thing about ‘adapting ourselves to the machine’ is that this necessarily involves an irreversible loss of information. In order to ‘take seriously what the machine takes seriously’ (i.e. in order to see the world in its way) we have to shed an awful lot of ‘relativity’. In the non-machine-like world rules exist only if we agree for them to; we have the freedom to decide whether there should be rules or not. In the machine-world rules are unquestionably important because the machine says they are, because the ‘seriousness’ of these rules is built into the very structure of that machine. Machines are machines because they take certain rules very seriously and are at all times utterly and completely inflexible in this regard. What we are basically saying here therefore is that in order to use a machine we ourselves must become ‘machine-like’; in order to use a machine we are required to ‘narrow ourselves down’ in other words, and the thing about this is that when we narrow ourselves we automatically lose our ability to see that we have become narrowed down – this is why we speak of this process as one involving ‘irreversible information loss’. Learning to see the world as a machine does is what we might call Cosmic Forgetting (or Cosmic Amnesia) – we have forgotten something huge, something tremendous, but we don’t remember having forgotten it! By getting engrossing in the details of the game completely forgotten about the ‘bigger picture’ and this makes everything we do both ridiculous and futile. It makes everything we do both ridiculous and futile, and also punishing. The machine-like world is a world that is not only utterly lacking in freedom, but also lacking in compassion.

The key difference between the machine world and the non-machine world is that the latter is essentially playful whilst the former is not. This turns out to be a very big difference indeed. We have equated the machine with a game but this doesn’t mean that what takes place in the game is at all playful; games (specifically what James Carse calls ‘finite games’) very far indeed from being playful – they are on the contrary deadly serious. We all know this anyway – what after all could be more serious than the person who is giving everything they’ve got in the desperate struggle to win rather than lose? What could be more serious than trying to win? A finite game is a very black-and-white sort of an affair – to win is the greatest thing in the world and to lose is the worst thing, so what could be less playful than this? A game gets to be a game by taking away our freedom, by taking away all ‘playfulness’ out of the situation, and this is why serious game players hate people who don’t take their game seriously. People who don’t take our games seriously remind us (in a way that we don’t understand) that there is such a thing as freedom (or playfulness) and this threatens everything, as far as we’re concerned. Finite game-players don’t like freedom because freedom is the one thing that is guaranteed to make a total nonsense of everything they take seriously; the threat of us having our game falsified happens to be something that we (predictably enough) take very seriously indeed! We have zero sense of humour about this sort of thing…

Saying that we lose our playfulness when we adapt to the machine is just another way of saying that we lose the ability to see that the way the machine requires us to see things isn’t the only way – this is the freedom that we lose without knowing that we have lost anything. The ‘very big thing’ that we have forgotten about is that there is more to life than trying to adapt successfully to the machine (or to the finite game, which comes to the same thing). We have forgotten that the universe is essentially playful in nature and that there is no inbuilt compulsion saying that we should do this, or do that, or do the other. Human beings love making up rules and then the next thing is that we get upset when someone comes along who doesn’t take these rules seriously but in reality there are no rules in reality itself there is something different something else, something that we might call radical freedom. ‘Radical freedom’ might sound rather unfamiliar to us as a concept but all we talking about here is play; play is not something that is given much consideration in the Judaeo-Christian tradition, if any – it has been noted that the Bible is notable as having almost as being almost devoid of any humour and as a result humour tends to be seen as us as being somehow ‘irreligious’, at least in any important matters.

Everyone likes to think that they have a sense of humour, needless to say, and amongst collections of ‘Bible jokes’ that we find on the internet (which attempt to show that there is indeed humour in the Bible) we also find important provisos such as ‘the Word of God is not to be laughed at’. We might be laughing but we must not laugh too much – our laughter must not get out of hand. For a serious message humour is always a dangerous thing – it can be tamed and ‘kept in place’ but it can also all too easily escape the bounds that have been and turn satirical. What we are looking at here is the phenomenon of ‘trying to contain the infinite game within a finite one’ – we’re trying to have humour and lightheartedness (because we know there’s something wrong if this element is missing) but within a serious context. This however is exactly the same as trying to have freedom (which we all know is good) within an unfree context; this is as Carse says an impossible thing – we cannot contain the infinite game within the bounds of finite play. If there is to be humour then it cannot be in any way restricted and if there is to be freedom then there cannot be any limitations placed on it. The notion that conventional Christianity is ‘perfectly okay with humour’ just doesn’t wash – we only need consider the bloody history of the Church to be reminded of this. There is no such thing as ‘a serious message’ outside of the artificial context of a finite game however, and this is reflected by the following quote from the Tibetan Buddhist sage Longchenpa –

In the experience of yogins who do not perceive things dualistically, the fact that things manifest without truly existing is so amazing they burst into laughter.

The stark humourlessness of the ‘Word of God’ can be contrasted with the nondual view of reality which is that the nature of reality itself is humorous; as Longchenpa also says –

Since things neither exist nor do not exist, are neither real nor unreal, are utterly beyond adopting and rejecting – one might as well burst out laughing.

If we don’t know if there is such a thing as ‘existence or non-existence’ then how can we take the notion of existence seriously? How we make important and portentous pronouncements about it? We can only come out with ‘serious messages’ about our own made-up constructs and this is why our seriousness is such a brittle and easily threatened sort of a thing.

It might be said therefore – with ample justification – that our cultural bias in the West has caused us to misinterpret life as being deadly serious affair and that it is all about making sure that we get it right rather than getting it wrong (which is the ultimate ‘unacceptable outcome’). There’s no way anyone can try to say that it isn’t what Western culture is about – we all know very well that it is despite the fact that we might be loath to admit it. Our rational/materialist culture is all about competition and winning and the implicit devaluation of anyone who isn’t a winner in the consumer game we are playing and this world-view is currently in the process of becoming the only view of life that anyone is ever going to know about. It’s a viral viewpoint that is rapidly taking over the whole planet. In the non-monotheistic traditions such as Vedanta, Buddhism and Daoism the inherently playful nature of reality is not de-emphasised however and we don’t get this terrible punishing emphasis on ‘winning versus losing’, ‘being right versus being wrong’, ‘obeying God versus disobeying Him’ (with all the guilt and fear of punishment that this entails). Lila, or ‘cosmic play’, is at the very heart of the Vedantic worldview and according to the Dao De Jing the Dao  does not lord it over all the things in the world, unlike the Judaeo-Christian idea of the All-powerful Father God with His very serious ‘plans’ for the human race. The Dao doesn’t have any plans! Similarly, when Brahma dissolves himself in the Cosmic Game (which is we might say ‘the Game of Forgetting and Remembering’) he doesn’t do this whilst hanging onto any ‘plan’ that he might have with regards to the outcome of this experiment! Brahma isn’t afraid to ‘let go’ and see what happens…

‘Seriousness’ – when it comes down to it – means one thing and one thing only – it means that we have forgotten both our own true nature and the nature of the universe that we are living in. It means that we have adapted all too well to the machine world that we have so incautiously created for ourselves with the result that the only view of life we have is the one that has been provided for us by the machine. The Machine (or Finite Game) only knows two things – ‘adherence to the rules’ or ‘deviation from the rules’. Either the machine’s specifications have been met (which by definition is ‘the best thing ever’ and cause for jubilation on a grand scale) or these all-important criteria have not been met and so what we’re talking about here is simply ‘error’. ‘How much does the machine value error?’ we might ask in our innocence. The answer is of course that it values it not at all. The machine has only the one interest in error and that is in eliminating it. In one way this is of course fine since the machine could never work as a machine, and do what it is supposed to do, unless it steers away from error, but in another way this simplistic mode of understanding the world is not in the least bit fine because what happens – when everything gets subsumed within the machine (or subsumed within the finite game) – is that there is no place left for consciousness, since consciousness has nothing to do with final outcomes whilst machines (on the other hand) don’t care about anything else.

Consciousness and machines don’t mix, we might say – they don’t mix because they represent starkly antithetical principles. Whilst consciousness can operate a machine (if we avoid the trap of having the tables turned on us) a machine can never support consciousness. In a machine, as we have said, there are only TWO THINGS – there are either ‘obeying the rules’ and ‘disobeying them’. Consciousness however has nothing whatsoever to do either succeeding or failing, getting it right are getting it wrong, ‘obeying’ or ‘not obeying’ – there is therefore nothing ‘machine-like’ about it at all. There is nothing machine-like about consciousness (or ‘reality’) and yet ‘the Machine’ (or ‘the System’) is all we know…

Art: Margo Selski, The Machine in the Garden